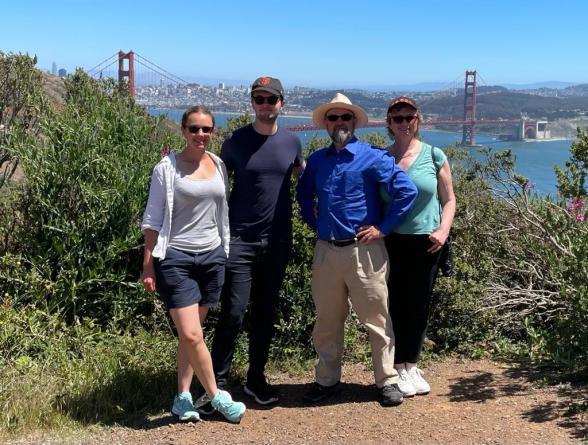 This artwork is also available as a Non-Fungible Token.

We're all vaccinated now. Triple-vaxxed actually. This year has been the story of the race between public vaccination and the virus evolving through the Greek alphabet. The  vaccine development programme is probably the scientific and logistical success of the century, but while we waited for the rollout it was a pretty miserable year. No trips. No adventures. The first five months of it was spent in lockdown.

Despite barely escaping our garden for months, Helen managed to catch Covid in July. She had only mild symptoms and didn't pass it on to the household, but she was incapacitated: one of a quarter of a billion people who suffered this year. Her vaccination almost certainly minimized the impact. Many did not get off so lightly.

Who is that masked stranger?

So we're all having to adapt to a Covid-endemic world. Oh-My-Cron is the latest variant - looking infectious but mild. We end the year much as we started - working from home, wondering what plans we can make. Face masks have become de rigueur.  Makes social interaction a minefield. Can you understand a word anyone says? No, us neither. Forgive us if we fail to recognize you from just your eyes. But let us adapt to this new adversity. Embrace the new chic. Face masks as a fashion item. Full body biohazard suits can't be far behind.

Andrew found himself CEO of Risilience, a new start-up this year, commercializing the outputs of the Cambridge Centre for Risk Studies. The new company provides a software platform and analytics for large companies to manage their Net Zero carbon emissions reduction plans, and has won clients such as Nestle, Burberry, easyJet, Maersk, and Reckitt. He found this challenge rather exhilarating and was able to raise investment funding and steer a rebranding and public launch that might delay his retirement for a little while longer.

Alice and Martyn in their new home

Alice and Martyn have finally bought a house in High Wycombe to sit out the work-from-home. Alice has a new job as Education and Careers Manager, at the British Orthopaedic Association, which she's loving. Martyn is in the final year of his PhD in chemical engineering at Brunel University. They both run round fields for fun on a Saturday.

Runner 37269 in the London Marathon

After last year's cancellation of the London Marathon, Alice finally got to run the iconic route. It was an emotional day with wonderful support, some dramatic weather and lots and lots of gummy bears! A big thank you to everyone who helped Alice raise over £3,000 for Macmillan Cancer Support, a very special cause to her.

Tragically Still Undisturbed by His Family

Henry has been stranded in California for most of 2021 (alas alas) but has used the perpetual lockdown to study for the First Qualifying exam for his PhD in English literature at the University of California at Santa Barbara, which he passed in June. Apart from enjoying the sun/sea/sand, he has been teaching Shakespeare and poetry to American undergraduates over Zoom and beginning to plan his dissertation. In July, he rewarded himself by braving the UK’s quarantine policy to visit the family for the first time since the lockdown came into effect, and be able to attend some of the more important events of the year. Now in his third year at Santa Barbara, he is patiently waiting for the day we can visit him to reciprocate – as are we!

Helen gets down with levelling up

Helen’s work at Cambridge Architectural Research on shrinking cities continues apace.  The EU-funded RE-CITY project is now in its fourth year, with many events involving all nine European partners.  The project has become adept at ‘blended’ events, with online participants joining in with those in the room.

Helen organised and hosted a virtual secondment at CAR for PhD students from other partner organisations, with a full schedule of Zoom-based lectures and discussions.   The two-week programme culminated in CAR’s first Early Stage Researchers’ Forum, where three other students presented their work alongside CAR’s doctoral candidate Faeeza.

Out and About Despite Lockdown

Nevertheless, Helen has been taking the odd work trip, strictly with the UK.  She’s been attending conferences and renewing links with old colleagues in Edinburgh, Glasgow and Manchester.

At CAR too, Helen continued with work on improving the quality of data available on the environmental impacts of construction materials.  The client was a consortium of Green Building Councils from several European states: one objective but widely diverse viewpoints around the (thankfully!) virtual table.

Woke up one morning and saw a horse in my pyjamas. How it got into our garden we'll never know. We dubbed her Whinny. She refused to be ignored and came up to the house and looked mournfully in at Andrew's office window disrupting a Zoom call with his expletives of surprise. She demanded carrots. Whinny's coat was wet, so we think she must have swum the river to get here. After no claimants came forward, we found her a nice home at the glue factory, er I mean horse sanctuary. Let us know if you've lost a horse.

Our first foray of freedom after lockdown was to Wimbledon, where they were allowing 50% occupancy, so we treated ourselves. A family get-together on Court 1, with Pimms and lunch all laid on. Great to see some of the tennis greats, and to witness the new generation starting to threaten the old guard.

Helen enjoyed giving some of her millinery creations an airing at these events. Ascot is to hat making what the Oscars are to movies.

Like everyone, we’ve been continually frustrated by the fluctuating Covid restriction through the year.  However, we’ve managed some fun in the (British) sun from time to time.

First there was a spiffing Easter picnic at Hatfield House with Alice and Martyn: Jacobean grandeur, gambolling lambs, and an entrancing robo-mower keeping the gardens trim.

Then for the serious stuff – the footie.  After many months of armchair football support (including a party for the Euros, which were finally played after postponement from last year) we finally got to a live match again. We joined Andrew’s school friends - 'the Brians' - and their partners for an enjoyable weekend in Salford Quays and made the short trip on foot over to Old Trafford for the Man United-Liverpool match.  (An emphatic win by the visitors whose supporters comforted the Red Devils’ fans in the time-honoured fashion with the song suggesting politely that their manager would soon be replaced – which came to pass a couple of weeks later.)

It would be remiss of Helen not to remind everyone also of the heroic results achieved by the Arsenal in a series of local derbies: victories against Spurs and West Ham cheered on by Helen, and, joined by Alice, a famous last-gasp draw against Crystal Palace.

The Churchill College Writers’ Group sprang back with renewed vigour and Helen has been scribbling away.  However, publications for her this year have been strictly non-fiction.  She has contributed a chapter to the forthcoming Handbook of Shrinking Cities, to be published in the New Year by Edward Elgar. Also look out for a new edition of the Encyclopedia of Vernacular Architecture, with three articles penned by her on varieties of underground dwelling.

Meanwhile, pre-production work continues on the feature film My Good Side, written by Helen and her Talent Campus cronies. They now have a compact shooting schedule and are on the hunt for locations. New website online soon!

COP26 was the big Climate Change conference event in Glasgow, where national leaders and 40,000 other people got together to discuss how aggressively to reduce greenhouse gas emissions. The Cambridge Centre for Risk Studies was one of a handful of invited exhibitors to showcase entrepreneurial contributions to tackling climate change. Andrew and Risilience colleagues Ollie and Paul went to Glasgow to fly the flag and investigate the sustainability of 18-year-old malt whiskies.

We Got a New Tree

OK, well there hasn't been a lot of news, with not being able to travel and all. So here's our domestic highlight: getting a new tree. In short, we chopped down an old one and went to a tree nursery and bought a new one, and planted in the garden and now we got a new tree. Andrew's very proud of it. (It's been a quiet year.) 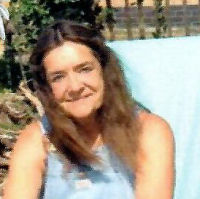 Chris and Lauren's wedding at the Ashmolean

A Wedding in Oxford

Alice's friend Lauren Sumner-Rooney got married in Oxford, once wedding gatherings were allowed again. Such a privilege to join Lauren and Chris for their wedding in Oxford's Ashmolean Museum. Although we're sad to see them go, moving to Berlin together, we'll just have to go and visit them!

And in case you've lost your way, this is the home page of the Coburn Family: Andrew Coburn, Helen Mulligan, Alice Coburn and Henry Coburn.