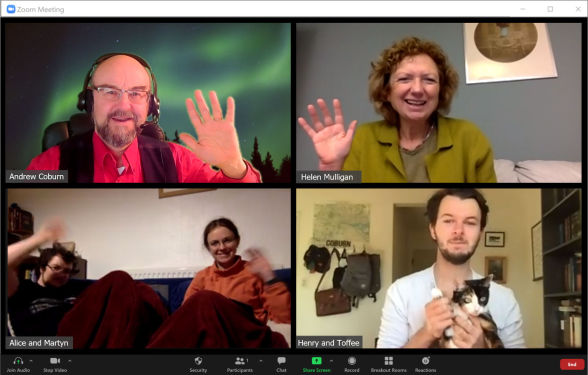 Virtual Greetings from Us All

A plague on everyone's houses

We've certainly got to know our house a lot better after months of social distancing by staying home. Like everyone else we've learned how to operate almost entirely through a Zoom interface - work, checking on the family, pilates and dance practice.

Andrew's work on pandemic risk went from theory to grim reality as he had to live through a scenario he had published six years before. Now the real challenge begins. Finding a cure for an infected economy that is in intensive care.

Like many others, we had to give up on quite a few things that we would have loved to have reported on in this annual gazette. Like... 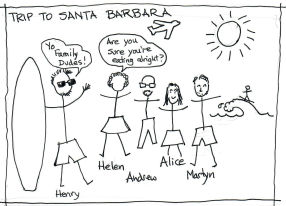 Our Trip to Santa Barbara

We would have been flying to California to visit Henry where he is doing his PhD at University of California Santa Barbara. The very week of lockdown as it happens. Would have been nice to have seen some sunshine. As well as Henry, who we haven't hugged for over a year. We still have the plane tickets so will try again, if Virgin Atlantic can stay solvent. 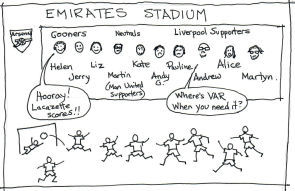 For Helen's birthday in May we had booked a box at the Emirates Stadium to see Arsenal against Liverpool - our old family rivalry. All games were cancelled, and nearly the Premiership itself. When the match was actually played (in July to an empty stadium) it was not as exciting on TV but Arsenal won 2-1. Liverpool went on to win the Premiership. So there. 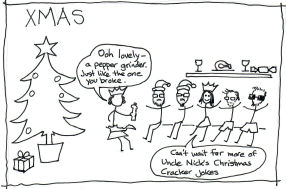 Heartbreaking to have to cancel the family Christmas gathering, particularly with less than a week's notice. Helen and Andrew look forward to eating a fridge full of food that would have fed the 5,000. The presents we can't exchange will make  nice surprises, even for ourselves, when we finally get to open them.

(That's enough cancelled events, Ed. Now get on with things you did actually do...) 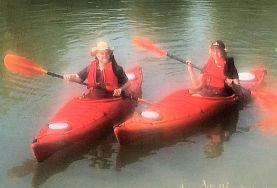 Taking to the waters

Exercise options have been limited – like everything in the time of Corona.  But we’ve managed quite a few games of tennis on some lovely outdoor courts (when permitted).  We’ve cycled. We’ve participated in Zoom exercise sessions with the wonderful Jo Hopkins of Move It Fitness. And we’ve scraped the snails off our kayaks and paddled up and down the empty river Cam to wave at our friends.  All this exploration of the local environment through the changing seasons has inspired a new project for Helen: a tongue-in-cheek guide to hill-walking in our famously flat landscape.  Listeners to the BBC Cambridgeshire evening show will have heard excerpts from this in early August. 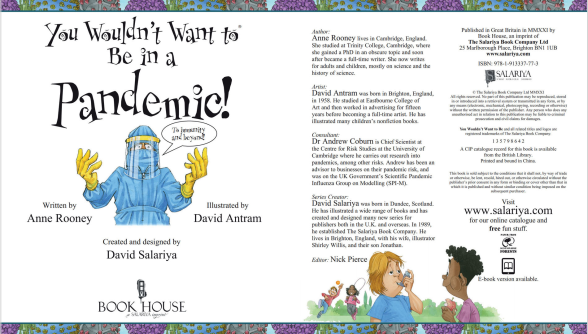 You Wouldn't Want to Be in a Pandemic

In case it hadn't occurred to you, the forthcoming book about not wanting to be in a pandemic is perfect lockdown reading. Written by Anne Rooney for the 'You Wouldn't Want to Be...' children's series, they reached out to Andrew as consultant to provide some of the nastier details. A perfect Christmas present if you haven't suffered enough.

Gargoyles of Cologne, 533 steps up the cathedral’s tower

Helen’s pan-European project on Shrinking Cities swept along despite the challenges for international exchanges posed by Covid-19.  She was able to get to Germany to coach students and present material on environmental issues at workshops in Saxony (January) and the Ruhr (September). Other projects included a study of Somerville College Oxford’s dining hall with a view to improving its acoustics, lighting and natural ventilation; and research on life-cycle analysis of construction materials for Green Building Councils in Ireland, Italy and Croatia. 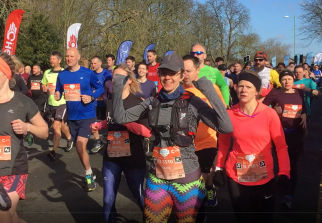 Alice running the Cambridge Half Marathon

Alice has been sitting out lockdown with her partner Martyn in Denham, Buckinghamshire (variously in Tiers 2, 3 and 4). And keeping running to stay sane, including a virtual London marathon with her running group, and the Cambridge Half, before such events became historical oddities. 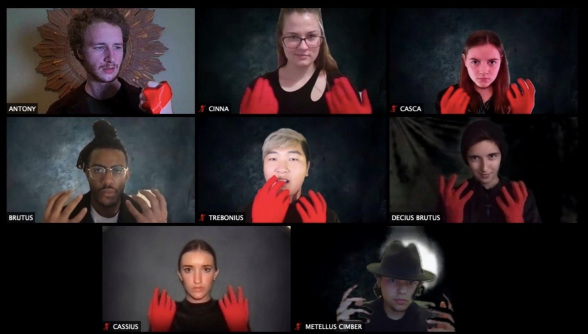 Henry is now doing his English literature PhD at the University of California Santa Barbara, teaching Shakespeare to the students there, while studying. The UCSB drama group Naked Shakes (honestly, they have no respect) put on a production called Immortal Longings, blending Julius Caesar, Anthony and Cleopatra, and a bit of Shaw's Caesar and Cleopatra for added continuity. It was an online Zoom production: set to bury traditional theatre, not to praise it.

Lockdown seems to have played into the paws, hooves, wings and claws of the beasts in and around our homes.  Muntjac deer popped up, buzzards and sparrowhawks swooped low, and swans took over the river in unprecedented numbers. Andrew witnessed the fledging of three peregrine falcon chicks from the tower of the Pitt Building in Trumpington Street. 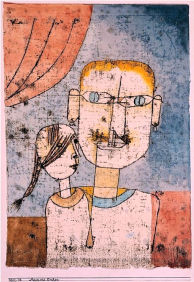 It’s not been a good year for film production – but Helen and her Talent Campus group have continued development on their feature film My Good Side.  Cambridge scriptwriting group Write On rose to the lockdown challenge with a programme of Zoomologues: mini-plays for one or two actors.  Two of Helen’s scripts - Now We Are Four and Our Paradise – were performed on Zoom for the Write On audience.

Helen’s continued to write prose pieces too. Her story The Compact was selected for the Churchill Writers’ Group Anthology 2020, which was published at the beginning of the year (ISBN 978-1-6604-5383-2).  And in December, A Cask of Ale: reminiscences of a graduate student in the 1980s, appeared in a special edition of the Churchill Review 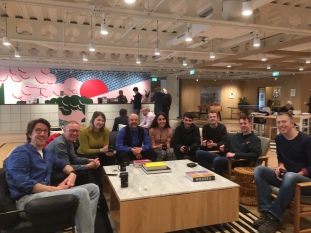 Centre for Risk Studies decamps to the private sector

A global pandemic costing $23 trillion was what we used to call our Sao Paulo Scenario. Now the Centre for Risk Studies has adapted this for Covid waves 1, 2, and 3. Businesses have placed orders for more risk analysis and Andrew and his team have set up in a WeWorks office to meet the demand. Plenty more gloomy scenarios where that came from.

With only a large flagpole for entertainment we have been signalling our desperation and frustrations with a series of semaphore signals, including 'Quarantine', 'Hooray for the NHS', 'Liverpool Champi-erns', and 'Europe We Still Love You'. 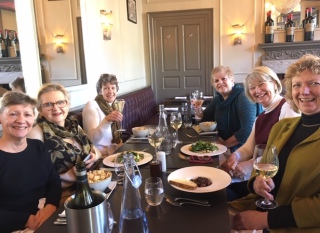 School chums toast 29 Feb. How long ago, how long….

Just to remind ourselves that such things were once possible, here’s a shot of Helen’s (highly unofficial) reunion with a group of classmates back on Leap Year’s Day.  Exhausted by the exhibition of Grayson Perry’s cheeky ceramics at the Holburne Museum in Bath, we were in need of light refreshments.

We lost two of our older relatives this year. Not entirely due to Covid. But not entirely unconnected either. 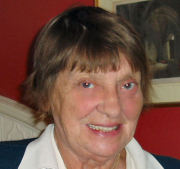 Vera: Our Aunt who came in from the cold

Vera – the youngest sister of Helen’s mum Edna – died on 2 November.  Her remarkable life included Cold War counter-espionage with the Secret Service - see our page on her life. She will be much missed. 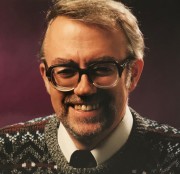 Uncle Arthur was a close friend of Andrew's father Len, and was the father of Sandie and Pam, bridesmaids at our wedding, all those years ago. Arthur was a casualty of the isolation of lockdown. We held his funeral service in a church where he was the craftsman who had made the large wooden crucifix that hung above the altar. 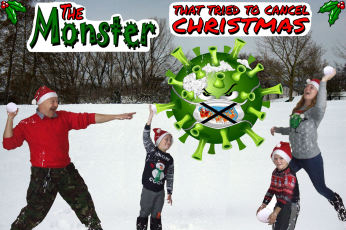 Uncle Nick's Xmas Card Sums It All Up

Yes. It has been a difficult year. And maybe there is still a way to go before it is all over, but we hope you are all safe and wish you the very best for a bounce-back 2021.